Part of this is because of the sheer distances involved in traveling the island, it can take hours to drive or train between its far-flung towns and cities.  But when it comes to exploring Hokkaido, the journey between the destinations is half the fun. 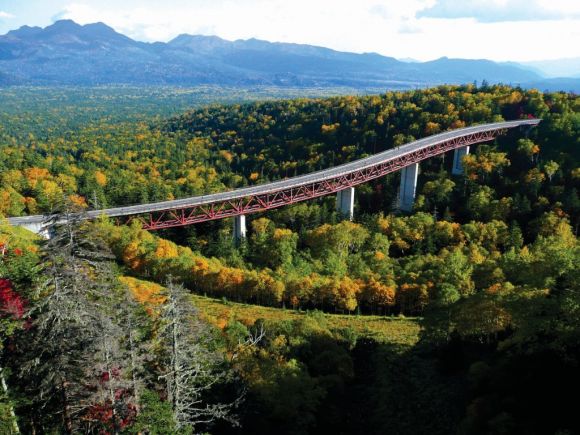 Sapporo 札幌
The Capital of Hokkaido Prefecture, Sapporo has a population of 1.9 million residents, making it the largest city north of Tokyo (and the fifth largest in Japan).  It was introduced to the world when the 1972 Winter Olympics were held here, and its many fine ski slopes continue to attract winter vacationers, as does the Snow Festival, held every February. 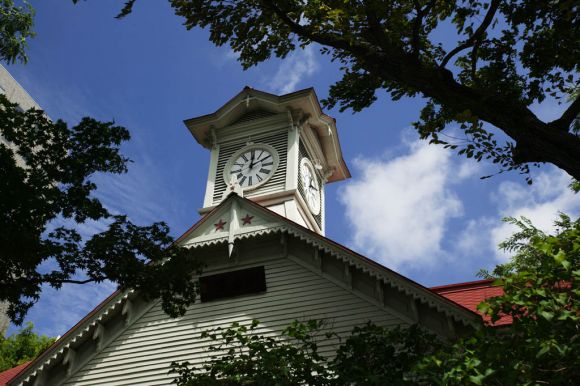 Did you know?
Only the female ginkgo trees bear fruit, and they need to be in proximity to a male ginkgo to make the nuts. Ginkgoes are considered to be a "living fossil" because they have been thriving for tens of thousands of years in their current form.
Photos taken on 11Oct14, Sapporo 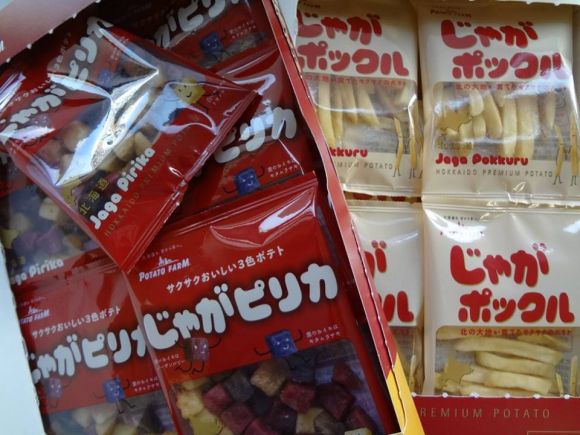 Hakodate 函館
Founded during the Japan’s feudal era in the 15th century, Hakodate was one of Japan’s first ports opened to international trade following the Meiji Restoration.  With its clanking street cars, sloping streets lined with historic buildings in Motomachi 元町 area, and port, it retains the atmosphere of a provincial outpost even today. 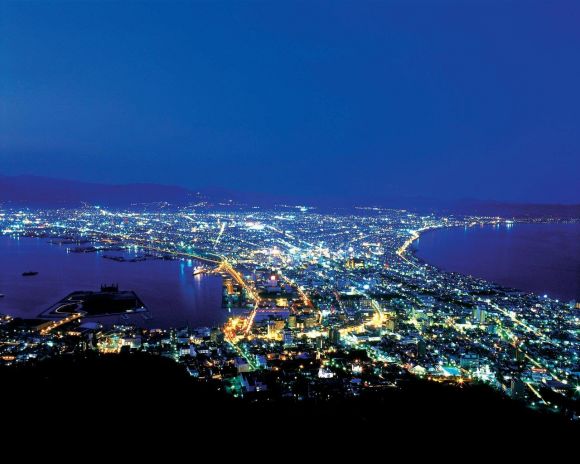 Rusutsu Resort
The fun doesn't stop, when the snow melts.  Rusutsu Resort is one of the major highland resorts in Hokkaido, situated only 90 minutes by Big Runs bus from New Chitose Airport, the gateway to Hokkaido. The resort is regarded as a Hokkaido’s premier golfing destination with 4 superbly crafted courses offering players a total of 72 holes. The resort also boasts of the Hokkaido’s largest amusement park with over 60 rides including 8 thrilling roller coasters. There is always plenty to do with many activities on offer such as rafting, horseback riding, mountain biking, hot air balloon flight and more, all offering a unique experience in Hokkaido’s great outdoors.  In the winter, as the snow falls Rusutsu is transformed into one of the largest ski resorts in Hokkaido. With 3 fabulous ski areas, East Mt., West Mt. and Mt. Isola, you will experience the pure pleasure of powder snow. 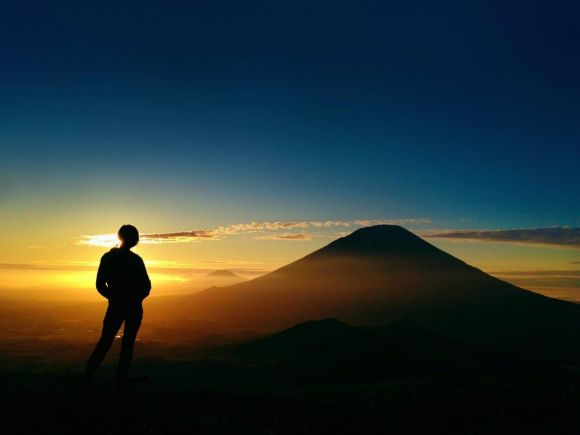 Furano 富良野
Nicknamed the ‘Belly Button’ for its location in the center of Hokkaido, this city has both fields of flowers in the summer months and excellent skiing in the winter.  From late June through early August, photographers flock here to shoot the area’s rolling hills ablaze with lavender and other flowers, often seeming to stretch from horizon to horizon. 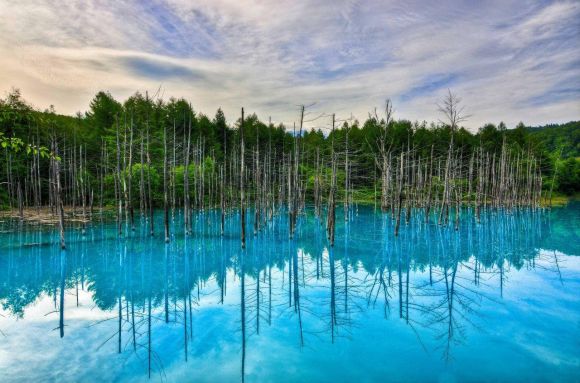 Lake Toya and Mt. Usu Geopark 洞爺湖＆有珠山ジオパーク
Lake Toya, which is situated in the southwestern part of Hokkaido, belongs to Shikotsu-Toya National Park.  Enjoy watching the spiral s of white smoke emanating from the Mt. Usu volcano, which was registered in world Geopark for the first time in Japan in 2010. 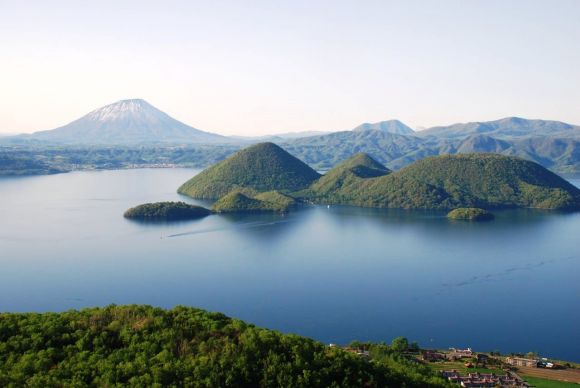 Noboribetsu Onsen 登別温泉
Famous for the variety of its hot-water springs ever since the first public bathhouse opened here in 1858, Noboribetsu Onsen is the most popular of Hokkaido’s many spa towns.  It boasts 11 different types of hot water, each with a different mineral content, and gushes 10,000 tons of it a day. 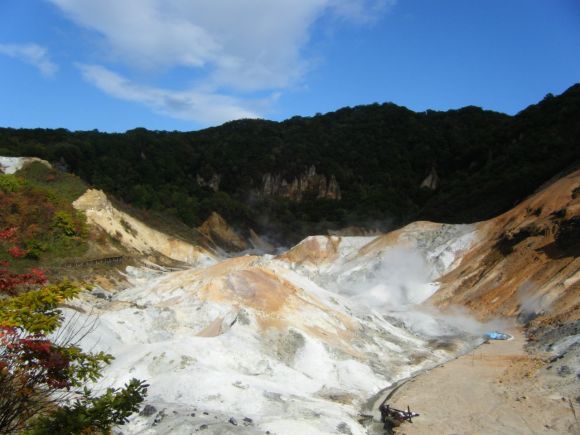 Do you know the place where this statue, called Yukake-Kizo Demon, is situated? In Noboribetsu Onsen, you’ll find different shaped Kizo（鬼像） demons. Some scary faced and others funny. They are guardians of the hot spring!? 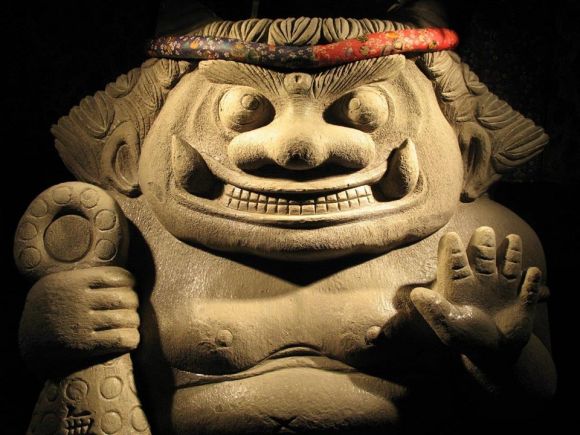 Asahikawa 旭川
Japan’s northernmost Zoo, Asahiyama Zoo 旭山動物園 is a one of the highlight of the city. The concept of the zoo is to provide an environment where each species can use their abilities and a space where each animal can relax. Visitors enjoy watching diving polar bear, a spotted seal swim in the narrow tunnel and more very close at hand. 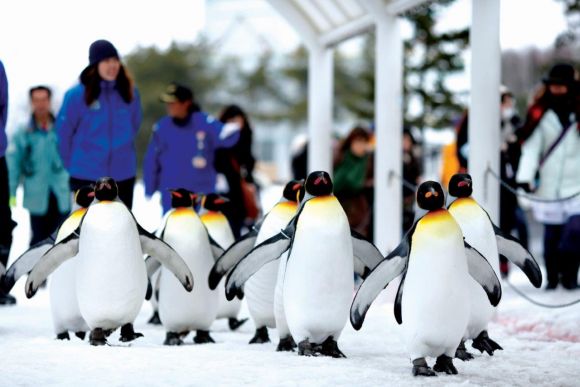 Kushiro 釧路
In the north of Kushiro is Japan's largest marshland, Kushiro Marsh, which stretches out over the majority of the Kushiro Plain. Kushiro Marsh is listed as a national park.  Kushiro Tancho Nature Park is known as the site of the first successful artificial breeding of tancho cranes 丹頂鶴 (Japanese cranes), which are designated as special natural monuments. 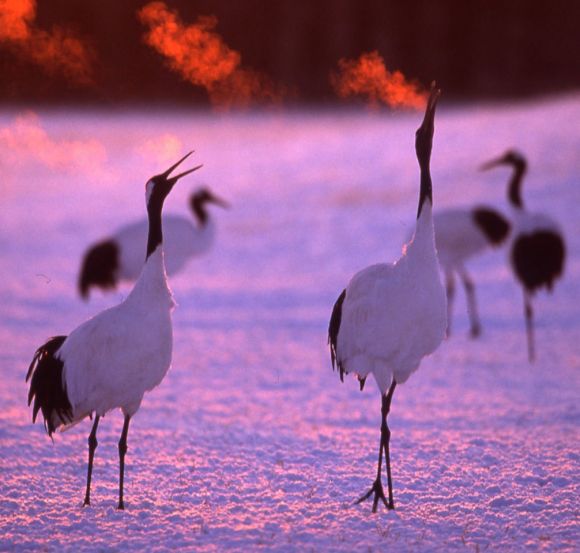 Obihiro 帯広
The main city in the Tokachi Plain, one of Japan’s major agricultural belts. 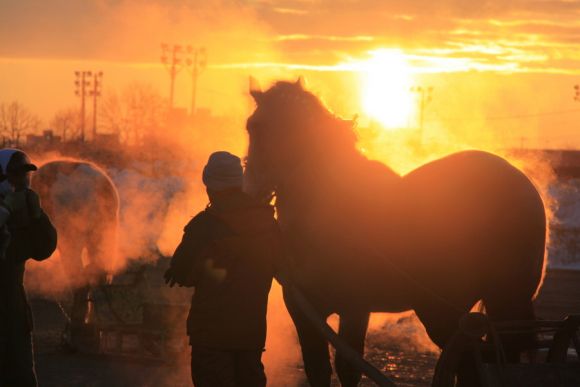 Abashiri 網走
Abashiri, the largest town on the Okhotsk Coast of northeastern Hokkaido, is a product of fishing and tourism. In addition to an abundance of seasonal seafood available throughout the year, it is also blessed with natural beauty, such as primeval flower gardens, lakes and ice floes. 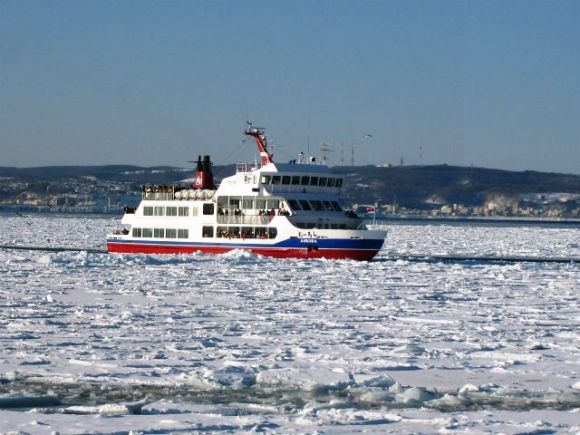 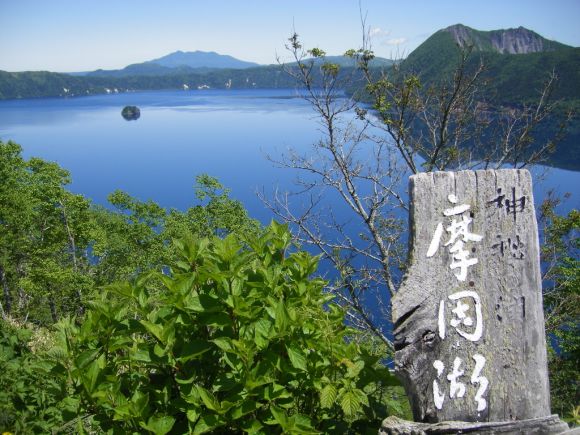 Can't wait for spring to come. - - - Matsumae Park 松前公園
The castle town Matsumae is situated at the southern tip of Hokkaido, about a 2-hour drive from Hakodate.
Matsumae Park, which has been created around the castle ruins, boasts of over 10,000 cherry trees of 250 different varieties. Every year these trees, some of them are more than 300 years old, come into full bloom around the Golden Week holidays.
The park is designated the Best 100 Cherry Blossom Viewing Spots in Japan. 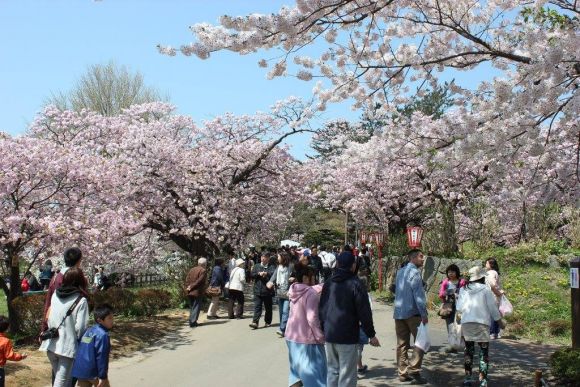 Hokkaido Brand, Hokkaido Potatoes - - - 男爵 Danshaku
Here is a hotel in Hakodate which is relating to Danshaku potato. It is Hakodate Danshaku Club Hotel & Resorts. The name is derived from Baron Ryokichi KAWADA 川田龍吉 (1868-1912). He studied shipbuilding in Scotland. Returning home, he brought modern shipbuilding technology into Hakodate as well as modern agricultural technology. He succeeded in improving an English potato suitable for the climate in Hokkaido. That saved people from food shortage. The potato was named Danshaku 男爵, which means Baron. 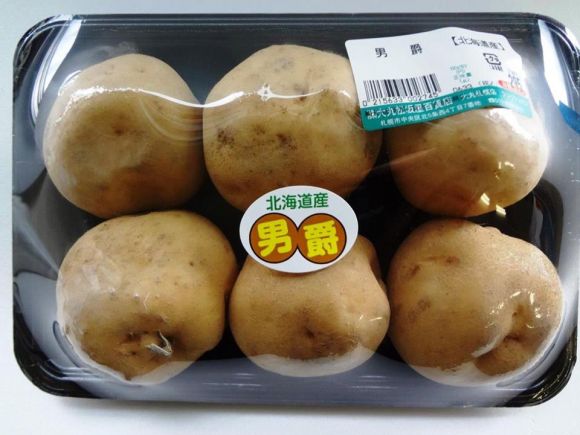 The star-shaped Goryokaku was a western-style fortress built by the Tokugawa shogunate at the end of Edo period. It became the center of action in the civil war between the last remnants of the Tokugawa clan and the new Meiji government. The site of the former fortress was turned into a public park boasts of 1,000 cherry trees. Goryokaku-kosen Park, a 15-minute drive from JR Hakodate Station, is one of the best cherry blossom viewing spots in Hokkaido. 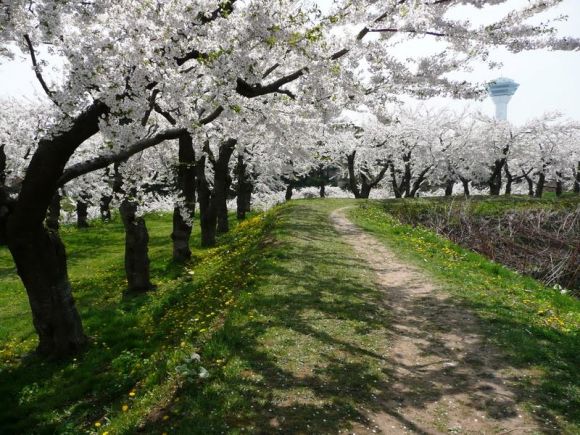 Lake Shikotsu 支笏湖
Situated in the west of Chitose airport, Lake Shikotsu is Japan’s northernmost unfrozen lake even throughout Hokkaido’s harsh winter.  This is a crater lake formed over 40,000 years ago, with a depth of max. 363 m.  The clear water of the lake is breathtaking. 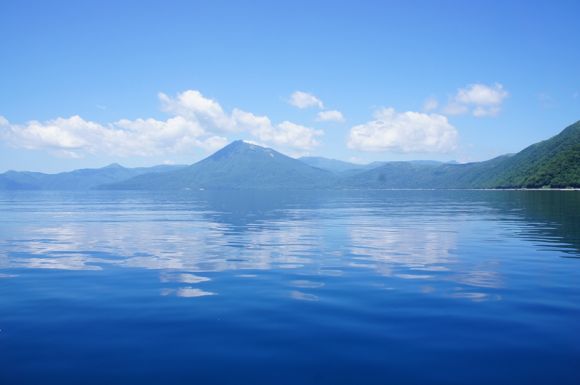 ２０１５千歳・支笏湖氷濤まつり HOKKAIDO
The Lake Shikotsu Ice Festival 2015 will be held in Lake Shikotsu Hotsprings from 30Jan (Fri) to 22Feb (Sun).
The main showcase is ice sculptures, created by sprinkling and congealing water are gleamed in natural blue in the daytime and beautifully illuminated with different colors of lights at night.
During the festival, bus services are available from/to New Chitose Airport, JR Minami-Chitose Station and JR Chitose Station. 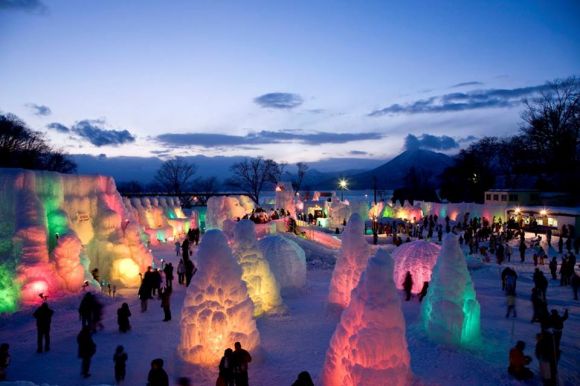 Speaking of Winter dishes, it must be 'Nabemono desho.' Nabemono (hot pot) dishes such as yose-nabe, ishikari-nabe, shabu shabu are hearty wintertime favorites for Japanese. Dining on Nabemono could be a participatory experience for foreigners, since everyone at the table does the cooking. 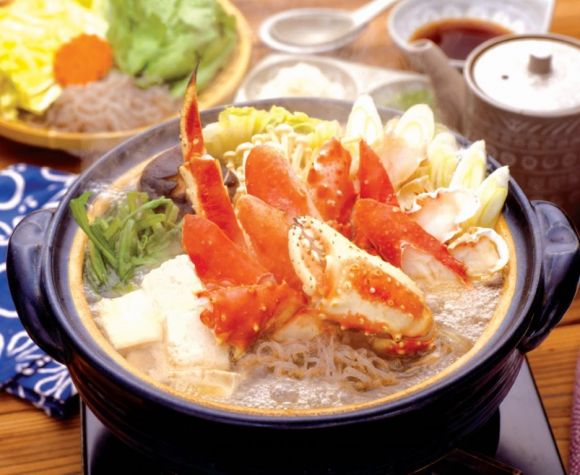 Azalea Festival in Esan, Hakodate
Located 60 min drive in the east of Hakodate, a volcano Mt. Esan 恵山 (618 m above sea level) is famous for the glorious blooms of 600,000 azaleas from late May to early June.
The foot of the volcano turns crimson in a riot of the rose pink blossoms. 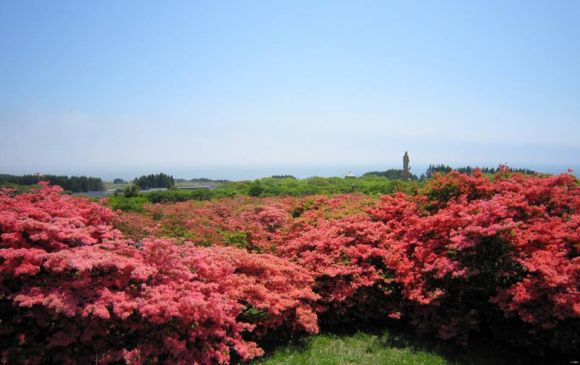 Onuma Quasi-National Park 大沼国定公園
is located about 30 km north of Hakodate, Hokkaido’s third largest city.
The park consists of Mt. Komagatake 駒ヶ岳 and three lakes which were formed by a volcanic activity about three hundred years ago.
They are Onuma 大沼 (Literal meaning is a big lake), Konuma 小沼 (Lit. a small lake) and Lake Junsai 蓴菜沼 (Junsai is an edible water plant).
It takes about 60 min. to walk around the lake through a series of arched bridges. You can also enjoy make a circuit of the lake by rented bicycle or by one of the pleasure boats operating from Spring through Autumn.
The lake is renowned as an attractive spot to watch the sunset in spring among a beautiful display of ‘Mizubasho’ (Japanese shunk cabbage) flowers. 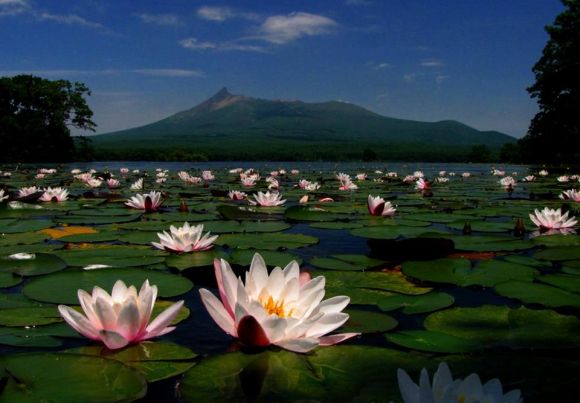 Can't wait for spring to come. - - - Temiya Park 手宮公園, Otaru 小樽
Otaru, located about 40 km north-west of Sapporo, is one of the must-go destinations in Hokkaido. This is not only because of historical sites, shops and local cuisines, but also because of cherry blossoms in Spring. Overlooking a lovely port city of Otaru, Temiya Park is situated calmly on a hill. Not many people know the park boasts approximately 700 cherry trees that burst into full bloom in the early May. 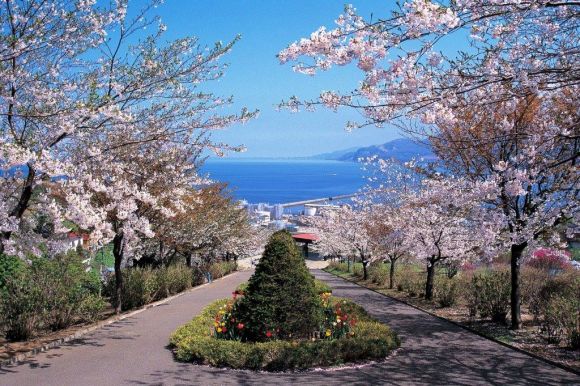 Otaru 小樽
It has developed and prospered as "the sea entrance of Hokkaido" over the last 100 years.  The glassworks shops, coffee shops, restaurants and shopping malls along the canal have been converted from stone-built or brick-built warehouses, which were used for storage in the days when commerce flourished and the canal was crowded with jostling barges. When night falls, oil lamps on the cobbled streets are lit, and the town evokes a gentle, nostalgic mood. 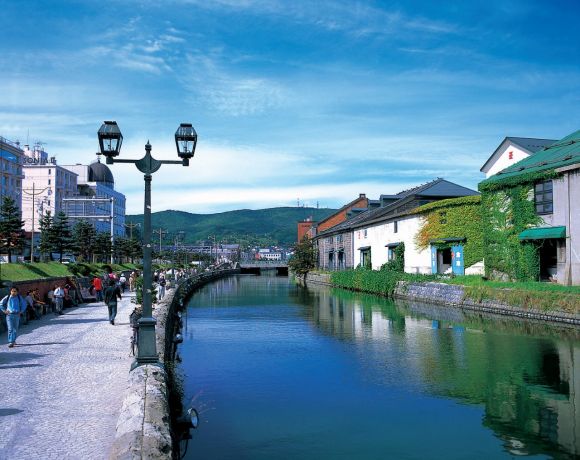