Kansai is the western region of the main Japanese island of Honshu, second only to Kanto region of Eastern Japan in population.

Thanks to convenient train lines connecting Kansai’s major cities, you can move around with ease. Kansai people speak a distinctive dialect of Japanese, use lighter-colored soy in their cooking, ride on the other side of escalators and are renowned for humor and their love of food. 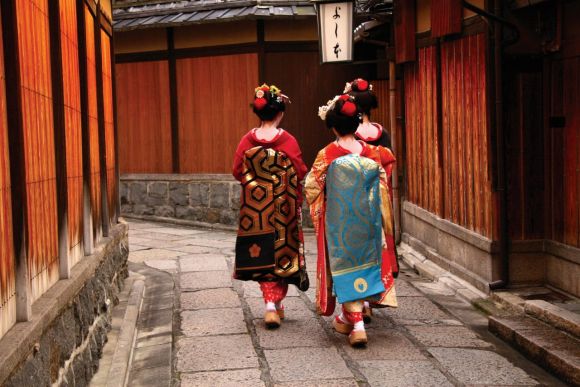 Kyoto 京都
If you have only one day to spend in the scenic city of Kyoto, set your sights on Higashimaya 東山.  Several of Kyoto’s many attractions are concentrated in the southern Higashiyama district, and touring the area on foot is easy as well as extremely enjoyable.

Osaka 大阪
With its towering blocks of neon-lit skyscrapers, teeming networks of underground arcades, and subway trains packed tightly with commuters, Osaka may seem like a den of mayhem compared to peaceful Nara.  Osaka is a city on the go, inhabited by non-nonsense, business-minded folk with a unique cultural identity.  Known for their sense of humor, the people of Osaka are outspoken, and they take particular pride in their food culture.  The expression ‘kuidaore 食い倒れ’ which means ‘eat till you drop’, originated here.

Takoyaki
Osaka people loves food made of flour such as Takoyaki, Okonomiyaki (Japanese pancake) and Udon, which they call ‘Konamon’. Among them, they love Takoyaki best. Takoyaki is a street food in Osaka, which is a snack between meals.

Here is how to make Takoyaki; mix flour and broth to make batter, and pour the batter for the Takoyaki hot plate on stove. While baking, you add chopped octopus, green onion, pickled ginger, and deep fried tempura batter, which enhances the flavor. As you bake, you work to make them round with a sharp metal pick. When they are finished, you add onto them a special sauce that is similar to Worcester sauce in England, and sprinkle some dried bonito flakes. If you like, you can also add a bit of mayonnaise on top. The outside of a Takoyaki is crisp and the inside is hot and soft. Be careful not to burn your tongue! 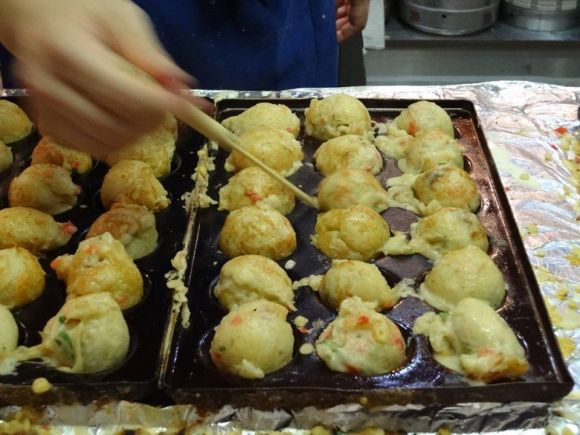 Plum blossom viewing in Osaka
With 1,250 plum trees of 93 varieties, Osaka Castle Park 大阪城公園 has the largest plum garden in Osaka city. Throughout February and March the park comes alive with hues of pink, red and white blossoms. 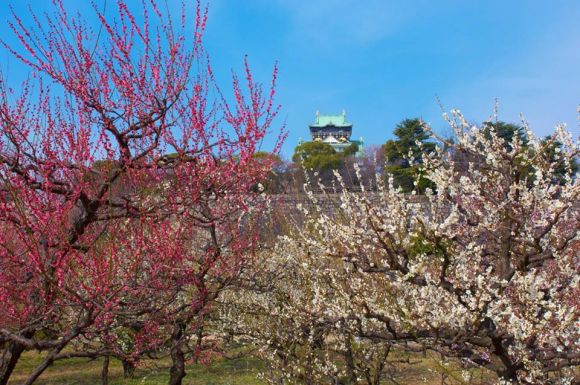 Can't wait for spring to come. - - - Osaka Castle Park 大阪城公園
Osaka castle, originally built in the end of the 16th century by Toyotomi Hideyoshi 豊臣秀吉, was burned down in a series of battles in the 17th century. Later reconstructed, and again destroyed by fire. The current castle was built in 1931.
The castle grounds boast approximately 4,000 cherry trees that burst into bloom in spring. Cherry blossoms are the absolute highlight of Osaka. Osaka Castle Park is one of the Best 100 Cherry Blossom Viewing Spots in Japan. 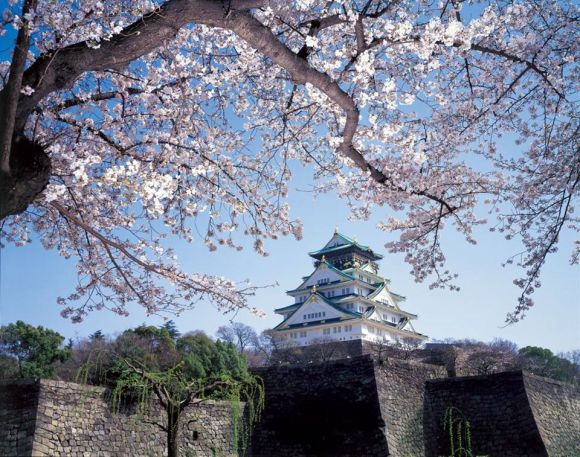 Nara 奈良
In keeping with Shinto tradition, Japan’s capital moved with each new emperor until the 7th century.  This practice ended with the rise of Buddhism and, in 710, Nara, which was then called Heijokyo平城京, became the first established capital of the country.  Although its time as the capital was short – lasting only 75 years, compared to Kyoto’s 1,000-year tenure – those years saw the birth of Japan’s art, crafts, and literature, thanks to the avid importation of influences from China. 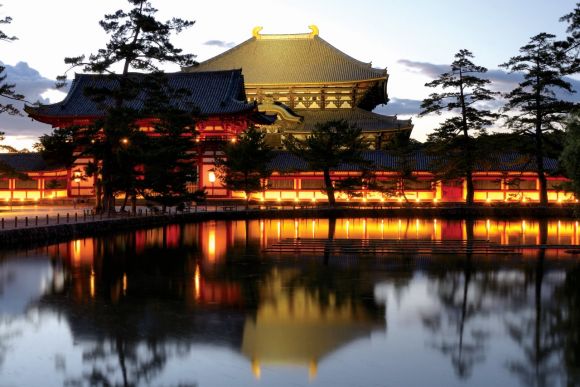 Ise Grand Shrine 伊勢神宮
Ise Grand Shrine（伊勢神宮） consists of Kotaijingu （皇大神 宮） or Naiku （内宮）, and Toyouke-Daijingu （豊受大神） or Geku (外宮). This Shrine, the most famous and revered in Japan, is affectionately called “Oise-san.” Toyouke-Daijingu or Geku is dedicated to Toyouke-Omikami, the Goddess of Farms, Harvest, Food and Sericulture. The shrine buildings show a peculiar combination of beauty, simplicity and purity. 5-min. walk from Ise-shi Sta. or 10-min. walk from Uji-yamada Sta. Kotaijingu or Naiku is dedicated to the Sun Goddess, Amaterasu-Omikami. The main buildings of Naiku are considered to represent the oldest style of shrine architecture in Japan. 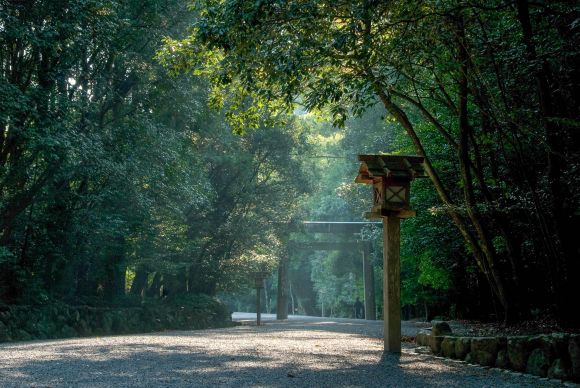 Kobe 神戸
Long before Tokyo became an international capital, Kobe had trade links with China and was one of the first Japanese cities to open up to the Western world in the 19th century.  A walk around the Kitano district 北野地区, with its Western-style houses, will make you feel as though you’ve stepped into a European village, while a visit to Chinatown feels like, well, the global phenomenon that is Chinatown, but it’s fun a night. 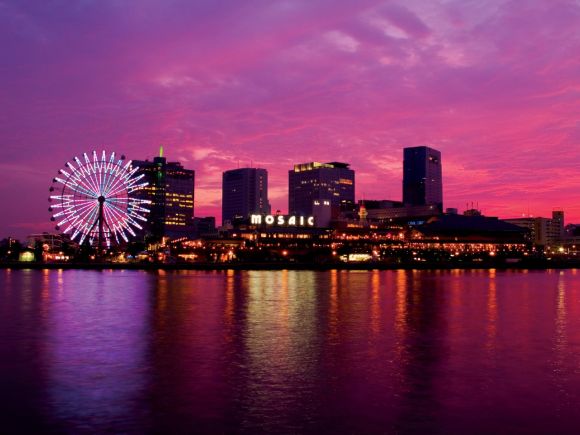 Koyasan (Mt. Koya) 高野山
Mt. Koya-san is located in the northeastern part of Wakayama and is in Koya-Ryujin Quasi-National Park 高野龍神国定公園.  On the peak of Mt. Koya-san, surrounded by mountains, is Kongobu-ji Temple 金剛峰寺, founded by Kobo Taishi 弘法大師, the Head Temple of Esoteric Buddhism, which has a 1200-year-long history. More than 120 temples are scattered throughout the area, thus forming a great religious city. 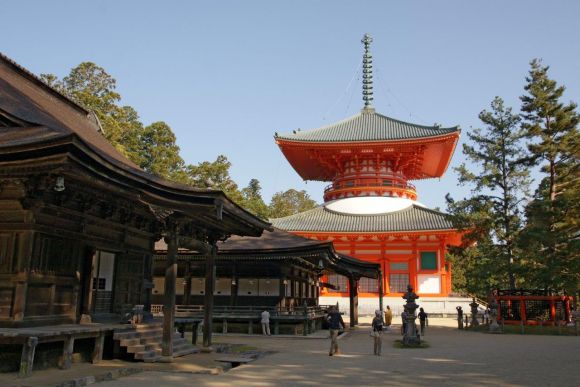 Arima Onsen 有馬温泉
Being one of the oldest hot springs in Japan, Arima-onsen is regarded as one of the country's three most famous hot springs. It is also well known as the spring cherished by Toyotomi Hideyoshi 豊臣秀吉 (1537-1598), and recently the remains of his bath have been found. It has two individual qualities: One utilizes hot water of a red-brown, ferruginous base called "Kinsen 金泉 (gold spring)" and the other is a colorless carbonate spring called "Ginsen 銀泉(silver spring)." At Tansan-sengen-koen Park 炭酸泉源公園 (a carbonate spring park), you can drink cold carbonate water, from which some say that Japan's very first soda pop was made. 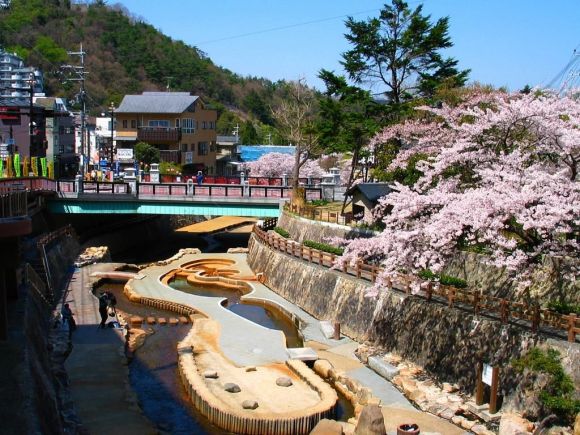 Lake Biwa 琵琶湖, in Shiga Prefecture covering 670 square kilometers, is the largest lake in Japan. If compared with the Hokkaido's largest Lake Saroma サロマ湖, which covers 151.9 square kilometers, Lake Biwa is more than 4 times as big as that. It almost looks like the ocean.
If you travel to Lake Biwa area, do not miss visiting Hikonejo castle 彦根城, designated a national treasure. After a construction period of twenty years, the castle was completed in 1622. This is an original castle, i.e. it survived the post feudal era without undergoing destruction and reconstructions. In addition to Hikonejo castle, there are three other castles designated national treasures in Japan: Himejijo 姫路城, Matsumotojo 松本城 and Inuyamajo 犬山城. 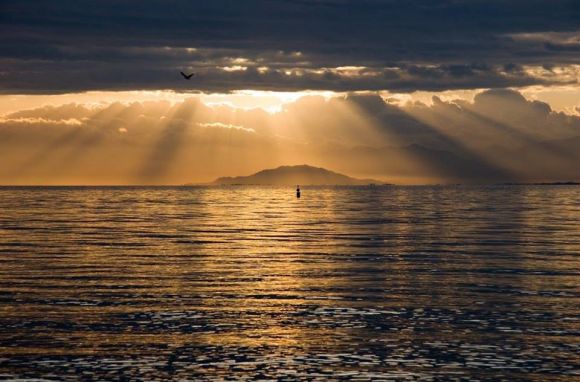 Can't wait for spring to come. - - - Hikone castle 彦根城
Approximately 1,300 cherry trees that surround Hikone castle in Shiga prefecture cover the moat and bridge with white and pink petals in spring. The castle, completed in 1622 after 20 years in construction, survives in its original form to this day. The castle, designated a national treasure, is one of Japan’s most beautiful and historic castles. 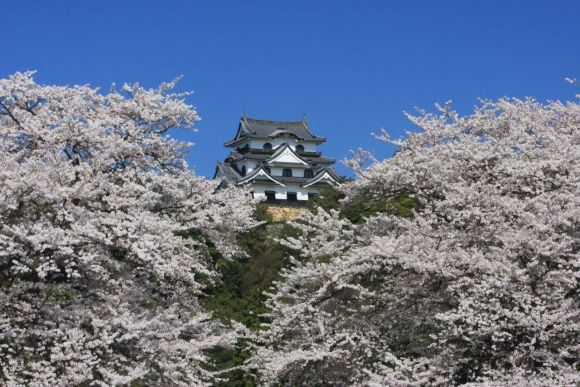 Meoto Iwa
'Meoto Iwa 夫婦岩', the Wedded Rocks are two sacred rocks in the ocean near Futami, a small town along the coast of Ise city, Mie prefecture. The two rocks represent husband and wife and are connected by a 'shimenawa' straw rope. 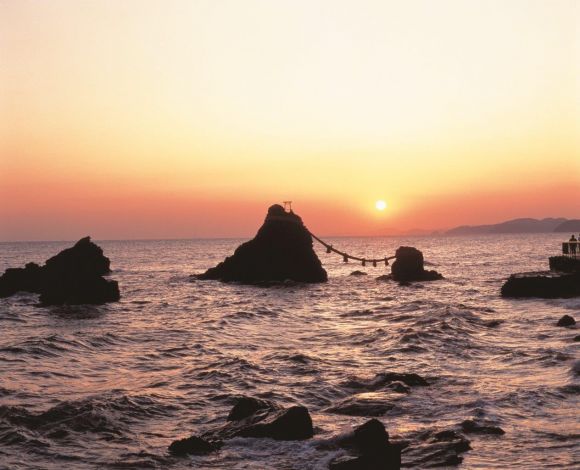 Akafuku-mochi
Akafuku-mochi 赤福餅 is a specialty of Ise. When you visit the Ise Grand Shrine 伊勢神宮, please try it. This is a rice cake topped with a strained sweet red bean paste, made from HOKKAIDO’s azuki (red beans) . The name of ’akafuku 赤福' derives from 赤心慶福.

Can't wait for spring to come. - - - Himeji Castle 姫路城
Himeji Caslte, also known as ‘Shirasagi-jo 白鷺城 (white heron castle)’ because of its whiter outer walls that resemble a white bird ready to take flight, is the most graceful and spectacular castle in Japan. Unlike many other castles in Japan, Himeji Castle was never destroyed in wars, earthquakes or fires and survives in its original form. Himeji Castle is both a national treasure of Japan and a UNESCO world heritage site. When spring comes, about 1,000 cherry trees around the castle bloom all at once. Himeji Caslte is one of the Best 100 Cherry Blossoms Viewing Spots in Japan. 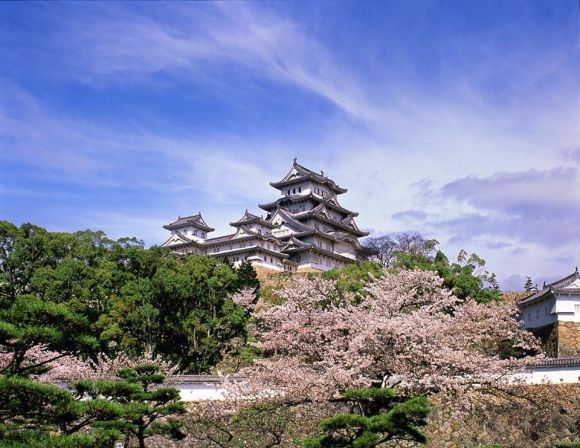 Did you know?
The number of restaurants serving Okonomiyaki in Osaka is as many as 3,449, which is the biggest in Japan.  For your information Hyogo comes the 2nd, 2,404 restaurants and Hiroshima comes the 3rd, 1,767 restaurants.
People of Osaka believe that the best food is ‘inexpensive and delicious’.
Starting out as a simple child’s snack, ‘okonomiyaki’ has become a popular food with adults.  ‘Okonomi’ means as you like it.  Choose from conventional ingredients such as sliced pork, chopped squid, shrimp, and thinly sliced cabbage.  Add these ingredients to a flour mixture and you have okonomiyaki.  More exotic ingredients can literally be added, ‘as you like it’.
(Photo ©JNTO) 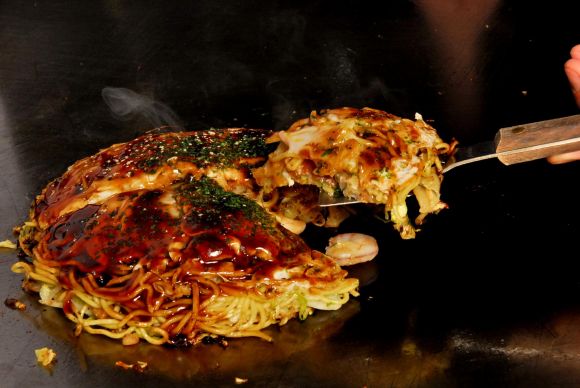