The island of Kyushu offers a real taste of Japanese southern comfort.  Its mild climate is home to some of Japan’s most well-known hot springs and national parks.

The terrain is generally mountainous with fertile valleys much like the rest of Japan, except for the wide plain area at the top of the island – The location of the largest cities of Fukuoka and Kitakyushu. 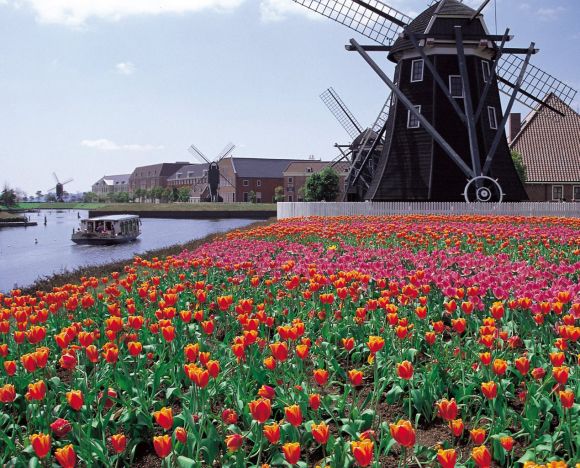 Fukuoka 福岡
Fukuoka City is a town that has developed on both sides of the Naka-gawa River, since Kuroda Nagamasa 黒田長政, a general of the samurai army in the 17th century, constructed Fukuoka Castle there. The eastern side of the river has developed as Hakata 博多, a merchant town, while the western side developed as Fukuoka, a castle town.  Around Hakata Station, lots of office buildings are rising, and restaurants and hotels stand close together.

What's New?
Follow Me Japan Pte. Ltd. (FMJ), Japan Specialists in Singapore, is launching unique tours to Kyushu, the southern island of Japan
in conjunction with the most iconic and luxury cruise train ‘The Seven Stars in Kyushu’ operated by JR Kyushu.
In spite of chartering the whole cabins for the 3 nights/4 days cruise, each cruise can accommodate only 28 passengers in 14 cabins. FMJ has 3 departures from Singapore. The first two will be 21Mar and 06Jun, 2015. 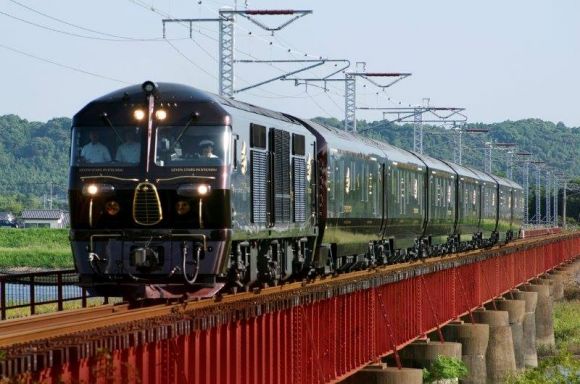 Can't wait for spring to come. - - - Fukuoka city 福岡
If you travel to Fukuoka, situated in the northern extremity of Kyushu Island, you can enjoy the fresh seafood from the Genkai sea, the Tonkotsu Ramen (noodles in milky pork bones soup), Mizutaki (Hot pot dish of Fukuoka with boiled chicken), Fugu (Blowfish) Cuisine, the Hakata's specialty from the yatai (street strolls), along with bars and restaurants in the largest entertainment quarter in Kyushu, Nakasu 中州. Not only satisfying your appetite, Fukuoka also offers graceful views of the cherry blossoms in spring at Maizuru Park 舞鶴公園, which is also the site of Fukuoka Castle Ruins 福岡城址, and Nishi Park 西公園, which is one of the Best 100 Cherry Blossom Viewing Spots in Japan. 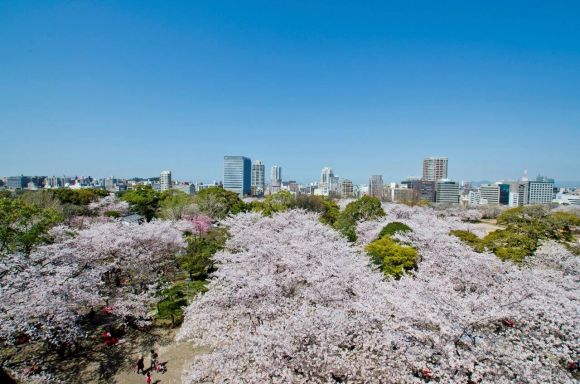 Kagoshima 鹿児島
This is a city of palm trees, flowering bushes and wide avenues.  The city spreads along Kinko Bay 錦江湾 and boasts of one of the most unusual bay vistas in the world: Mt. Sakurajima 桜島, an active volcano whose last major eruption was in 1914.  You can’t climb it, though – the caldera still regularly belches forth ash and smoke. 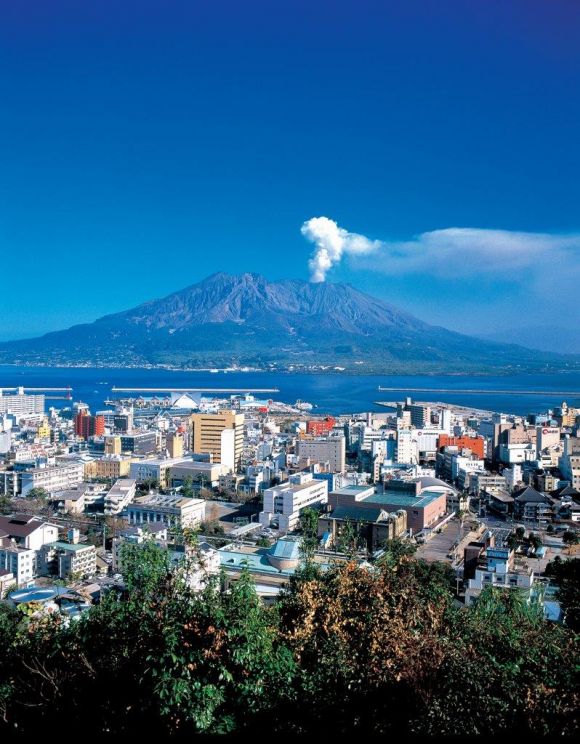 Ibusuki 指宿
Ibusuki is known for its steam sand baths 砂風呂, which are heated by natural subterranean geysers. Visitors clad in bath robes lying in the sand pits are buried with sand up to their necks. The weight and heat of the sand stimulate blood circulation, and after about 10 minutes, the whole body begins to perspire. It is a pleasant sensation for the young and old alike. 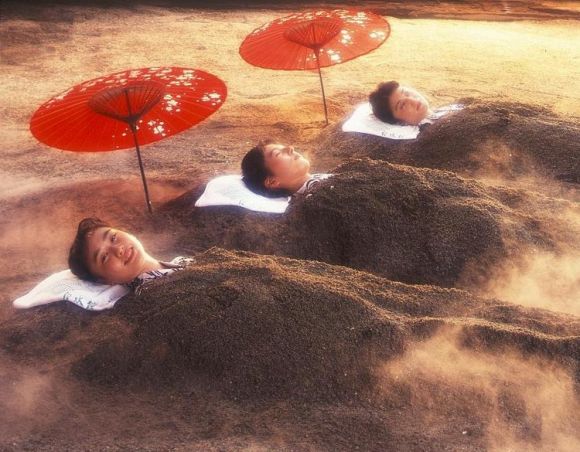 Kumamoto 熊本
Kumamoto was once one of Japan’s most important castle towns.  It flourished under the lordship of the samurai warrior Kato Kiyomasa 加藤清正, who greatly expanded its titular castle after Tokugawa Ieyasu 徳川家康 came to power in 1601.  A restored and renovated version of Kumamoto Castle still stands guard over the city today.

Can't wait for spring to come.
A tour to Kumamoto, Kyushu is not complete without visiting its most symbolic historic monument, the Kumamoto Castle. It is also best known for its spectacular springtime cherry blossoms.
Designated one of the Best 100 Cherry Blossom Viewing Spots in Japan, there are nearly a thousand cherry trees planted across the castle grounds and in the adjacent public parks. Trees are lit up in the evening. 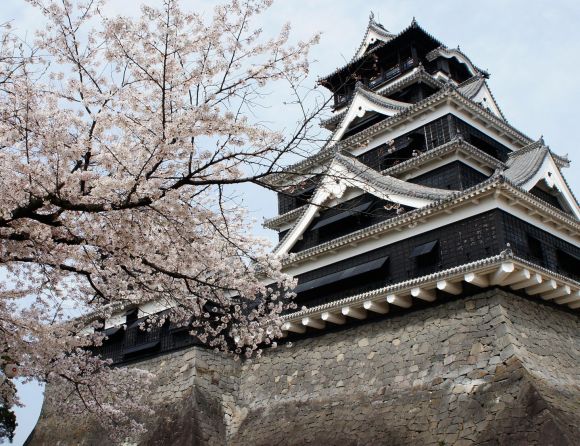 Nagasaki 長崎
Under the national isolation policy of the Tokugawa Shogunate, Nagasaki harbor was the only harbor to which entry of ships was permitted.  Even today, Nagasaki shows the influence of many cultures such as Dutch, Portuguese, and Chinese. 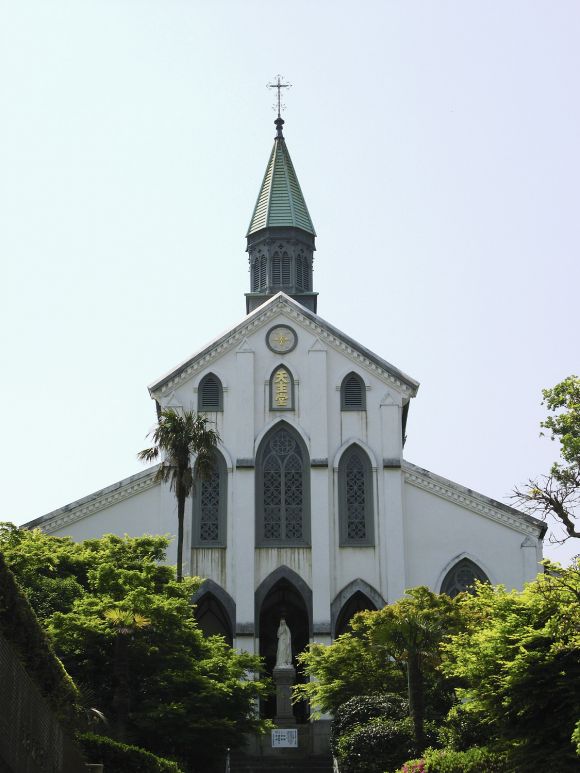 Arita 有田
Arita, the cradle of porcelain manufacturing in Japan, is a quiet town among mountains, located in the western part of Saga. Ri Sampei 李参平 (Korean name, Lee Cham-Pyung), a potter from Korea, discovered a fine-quality white porcelain mineral in Mt. Arita-Izumi-yama 有田泉山. This was the beginning of Arita's development into an internationally known town of porcelain. 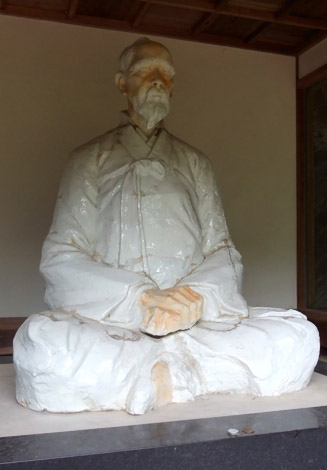 Beppu 別府
Beppu is located in the central part of Oita, on the coast of Beppu Bay faces the sea.  Hot water gushes at many spots in the city.  Beppu ranks first in gush volume in Japan. 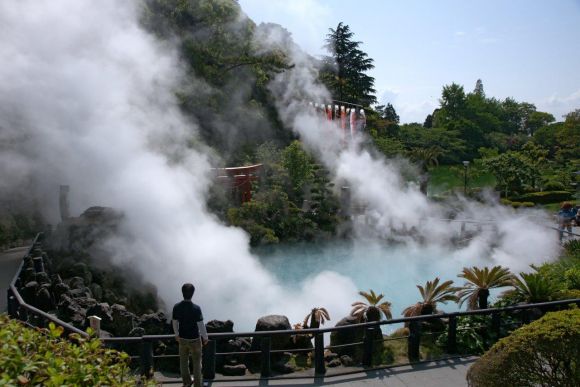 Yufuin 由布院
Yufuin is a spa town with many inns around Yufuin Station on a southwestern part of the skirts of Mt. Yufu-dake 由布岳.  It can be visited as either a day trip from Beppu or en route to Kumamoto City. 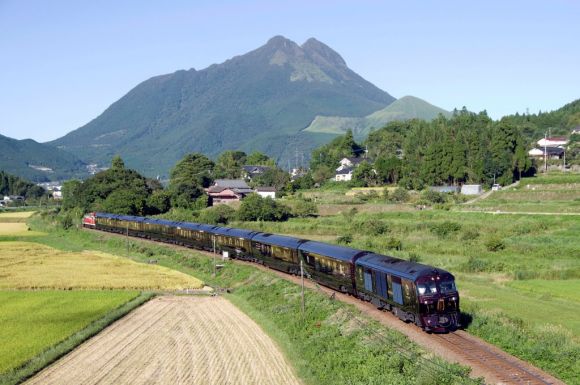