The main island of Okinawa, the most popular of the Okinawa islands, is located 2 hrs. 30 min. by air from Tokyo, and 2 hrs. 15 min. from Osaka.

It is a favorite tourist destination owing to its historical past, its coral reefs, emerald seas, sunny skies, and subtropical vegetation.  Okinawa was once a kingdom of its own called the ‘Ryukyu’ regime.  Shurijo castle was the residence of the Ryukyu royal family for about 450 years, since the early 15th century, and shone out as a focus for a brilliant dynastic culture. 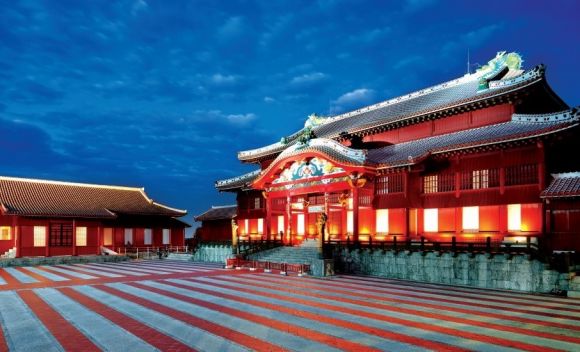 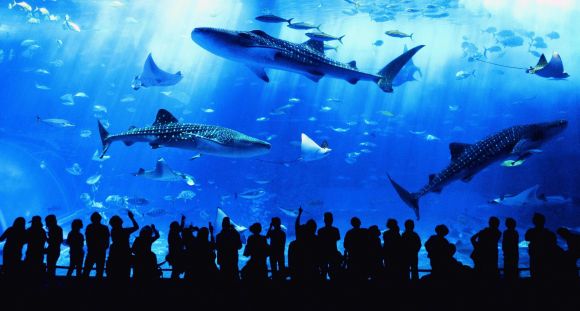 Goya Champuru
Champuru is an Okinawan word that can be translated as "mix." Thus, champuru foods are a mixture of various ingredients that are thrown together in a frying pan or wok and fried. A specific champuru is usually named for its main ingredient, although they usually contain several different elements. The most common champuru found in eateries and restaurants on the island are goya (bittermelon) champuru, said to be especially good during the hot summer months, tofu champuru, and somen champuru, which is fried thin somen noodles mixed with tuna, egg, luncheon pork and other items. Just about every cook and housewife on the island has his or her own champuru recipe. 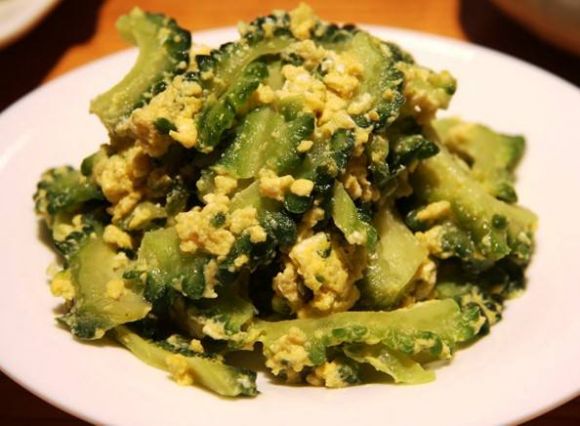 Soki Soba
If you mention ‘soba’ in Okinawa, it generally means Soki soba (Okinawa noodles made from wheat flour). It is different from buckwheat noodles known as soba in the rest of Japan. The thick noodles resemble udon, while the pork clear soup is more similar to that of ramen.
Photo: Traditional Soki Soba (OCVB) 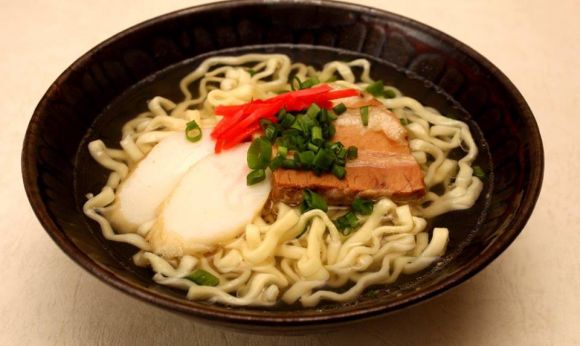 Chinsuko
This is a traditional Okinawan biscuit, which is similar to shortbread.
Among them, Kugani's chinsuko is one of the best. 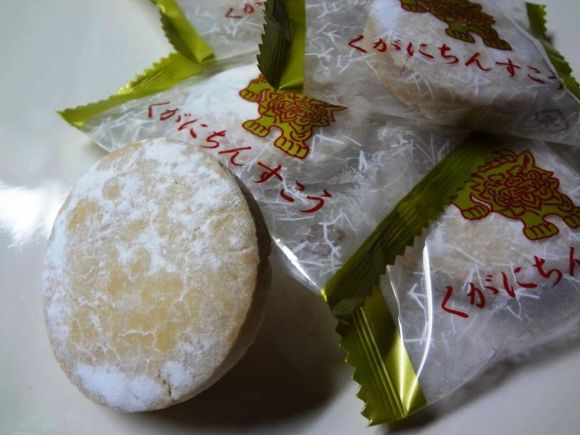 Café Unizon’s Gokuto-Kouglof
クグロフ Kouglof is a traditional cake from Alsace (France), which is also popular in Germany and Austria. Today, you can find Kouglof cakes with different recipes in many places.
Café Unizon’s 極糖クグロフ Gokuto-Kouglof is one of the famous Okinawan sweets. Interestingly enough, they stick to use particular brown sugar which is not only made by a traditional method but also made from Miyako-jima Island’s sugar cane NiH25 (農林25号). They prefer its mildness and natural flavor.

Kokusaidori
国際通り Kokusaidori is Naha’s main street, stretching for roughly two kilometers through downtown Naha. Many shops remain open until 11pm, and live Okinawa music is played at several restaurants.
If you are looking for even more shopping opportunities, you are encouraged to venture into the Heiwadori and Ichiba Hondori arcades, which branch off Kokusaidori. (photo © OCVB) 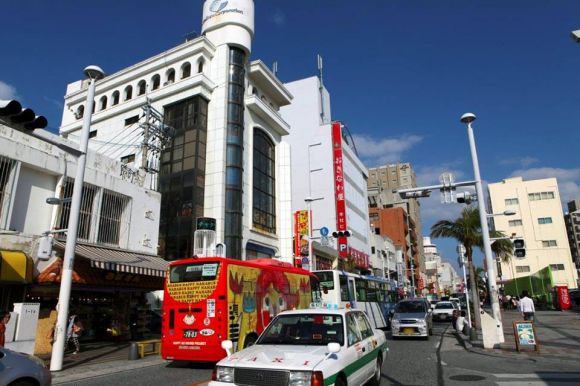 Blue Seal Ice Cream
When travelling overseas, it’s fun to find the local products and brands. The Blue Seal Ice Cream (in Okinawa) is one of them. How about one scoop of the Okinawan flavors after dinner such as Ryukyu Royal Milk Tea, Shiiquasa Sherbet, Beni-imo, Okinawan Salt Cookies and Okinawa Ta-imo Cheesecake? Regular flavors such as vanilla, mint and strawberry are also available.
photo © OCVB 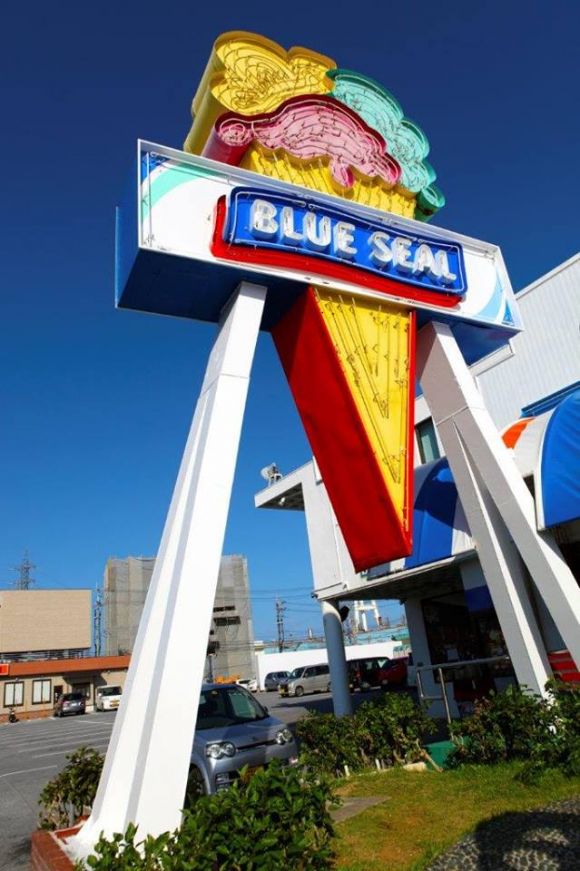 Flagship OKINAWA
At Flagship OKINAWA, a shop in the Plaza House Shopping Center, you’ll find a wide selection of the finest Okinawan products. Expect to see everything from ceramics to clothing, accessories, art gifts, foods. About a 50-minute drive away from Naha airport. (photo © OCVB) 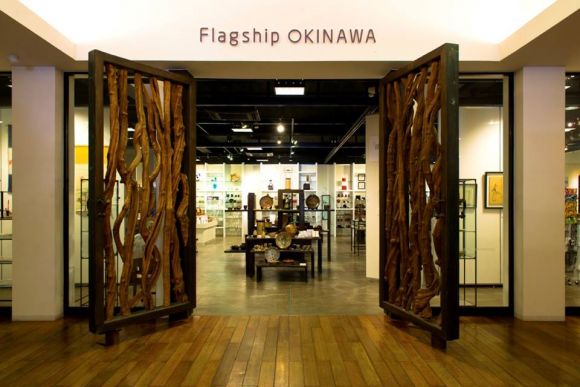 How about a Sata Andagi?
Sata Andagi サーターアンダーギー (“saataa” means sugar; “andaagi” means fried in oil) is a round sweet dough ball fried in hot oil. They originated in Okinawa so they often are referred to as Okinawa doughnuts and made in several varieties including pumpkin and sesame. (photo © OCVB) 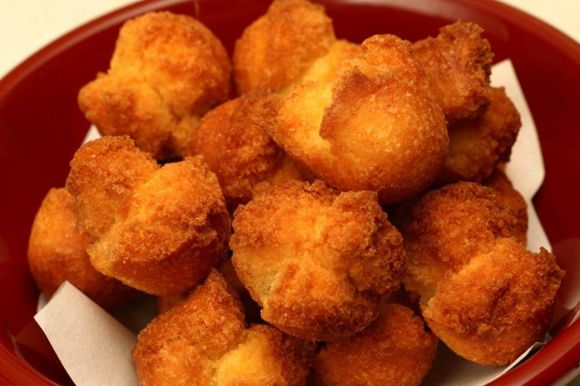 Good medicine tastes bitter. - 良薬口に苦し
Perhaps bitter melon is one of the secrets of the Okinawans longevity. Bitter melon is very low in calories but dense with precious nutrients such as vitamins B1, B2 and B3, C, magnesium, folate, zinc, phosphorus, manganese, and has high dietary fiber. It is also rich in iron, contains twice the beta-carotene of broccoli, twice the calcium of spinach and twice of the potassium of a banana.
Furthermore, bitter melon contains a hypoglycemic compound that is highly beneficial in lowering sugar levels in blood and urine.
(photo © OCVB) 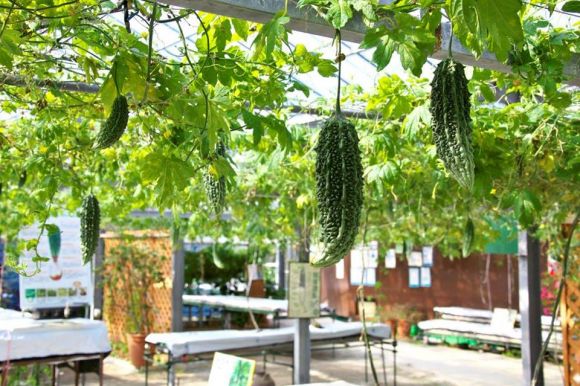 'Shisa' シーサー
'Shisa' is a traditional decoration modeled after the half-dog, half-lion guardians in Okinawa mythology. 'Shisa' usually come in pairs. Placed on the right, the male has its mouth open to ward off evil spirits. The female, on the left, has its mouth closed to contain good.
(Photo © OCVB)